Echo Strike – ‘Not Inside Your Mind’ review by legallyblack 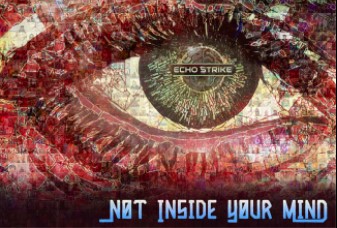 “Not Inside Your Mind” is the sophomore record from pop rock band Echo Strike, following the release of their debut album “Honest Lies” last year. With that previous album, the eight-man band – led by vocalist Randy Van Gelder –  delivered a collection of songs with breezy, pleasant-sounding production (with sonic influences of jazz, blues, new wave and electronic music) and simplistic (thankfully, not TOO simple given its obvious adult contemporary audience) yet catchy lyrics and hooks.

According to their official website, the band’s first world tour was cut short due to the COVID-19 pandemic, and Randy found himself stranded in Argentina. Like many creatives the world over, Randy sought not to let this unforeseen circumstance deter him from continuing his creative output. And so he started writing and composing the songs that will become the 13-track “Not Inside Your Mind” album with virtual assistance from his fellow bandmates.

Even if you go into this record not knowing about the pandemic-led creative process behind it (like I did, I’ll admit), its overarching theme of being unafraid of stepping out of one’s comfort zone is made clear from the opening track (and one of its singles) “Catch Me” onwards. And while on the surface, Randy expresses this theme in an external fashion (i.e. literally getting out of your house and opening yourself to new experiences), there’s also an internal, emotional subtext to what’s being addressed on this record. However, Randy wisely suggests to the listener – and pretty much ANYONE dealing with these quarantined times – to not stay cooped up “inside your mind” out of fear, concern, anger or pain.

On “Catch Me”, Randy sings from the perspective of someone whose personality has changed so drastically due to a new lease on life, it’s almost like he’s someone else. He uses running phrases to compare his current track record with the lives of his assumedly-contented peers  – and even dares them to keep up with him on the hook

(“Catch me if you can / I’m running faster than you can / Count to three and you won’t see me / I’m gone no sooner than”). Coupled with its sunny, vibrant production, this is a solid start to the album!

Another theme on “Not Inside Your Mind” is external acceptance of one’s maturity or change, particularly in a relationship. On “Give it a Try” (another album single), Randy encourages his significant other to look past his past mistakes and give him another chance. Interestingly, this is the only track that includes the album title in its lyrics (“There’s only one place to hide / And it’s not inside your mind”). He also encourages her to spend the rest of her life with him, whilst becoming better people in the process, on the airy, cheerful track “Just Fly”. I really dug the heartfelt lyrics on this track, in addition to the watery guitars on the beat and the ethereal vocalizing on the bridge.

Doubt and concern are completely non-existent on the genuinely sweet and sincere ballad “You” where Randy declares his love for the girl of his dreams. I dug the 80s new wave throwback vibe to this track (particularly in the song’s composition), and I couldn’t help but think of beloved ballads from that era from bands like Spandau Ballet and Tears for Fears (who I imagine were inspirations for Echo Strike’s style and sound). Off its sticky hook alone, I can imagine “You” being a go-to wedding song and a concert sing-along song in the near-future.

Speaking of sing-alongs and sticky hooks, “Let it Shine” is one of those songs that I’d personally love to see performed live in front of a large crowd. Easily the most inspirational cut on the album – and one of my favourite tracks PERIOD, this song includes words of wisdom in regards to learning from your mistakes, taking chances and risks, being unafraid to live life and most importantly, being the best person you can possibly be.

There are a few ‘party’ songs on “Not Inside Your Mind” like the club-to-the-after-party track “Like Candy”, another favourite of mine. Thanks to its toe-tapping, 80s retro, synth-based production, playful and slightly risqué lyrics and irresistibly catchy hook, “Like Candy” is an absolute standout on the album – and dare I say, much deserving of a 80s-style music video! In addition, there’s the smooth, laid-back joint “Dig In” where Randy and his girl get a taste of the nightlife, both being overwhelmed by its pleasures and each other.

However, not everything on this record is bright and sunny, or in the case of the party songs, neon-lit or club-based. On “Revisionist”,

arguably the darkest song on “Not Inside Your Mind”, Randy rejects a former friend of his (it’s implied that this person either stabbed him in the back or broke his heart – or both) and warns this person of the inevitable karma to come. The nocturnal production fits the cold tone of Randy’s lyrics perfectly, and while completely unexpected, his jazzy, Michael Jackson-esque scatting on the bridge played out way better than I initially expected!

The penultimate track “Perception” (which admittedly I was lukewarm to at first, but grew to appreciate with more listens) feels like a self-aware sequel to “Catch Me”, where Randy confronts his ‘improved self’ at a figurative mirror, questioning whether his new lease on life was all a façade, or how long it’ll take for his ‘old self’ to be revealed to the world, shattering the image currently in front of him. Closing the album off is the poignant track “Go” which can be viewed thematically from two perspectives; the protagonist realizing that in order to truly live his life, he must let go of the failing, toxic relationship which keeps him emotionally and mentally enslaved, or him feeling like an imposter, unable to fully accept his personal growth (due to his inability to move on from the past) and rejecting the one person who truly accepted him, flaws and all. And while it’s not an overly bitter song, you can tell Randy’s had enough of this girl, and is eager to seek the life – whatever it is and wherever it takes him – he always desired (“I don’t believe / You can’t redeem / So give me the key / To unlock the mystery”).

Like its title suggests, “Not Inside Your Mind” doesn’t require you overthink or examine every emotion expressed or lyric sung. And while it’s easy to sink into the album’s sonically gratifying production and straight-forward, uncomplicated lyrics, that’s not to say there isn’t some level of depth and meaning to the songs on it. As a whole, I found this record to be a considerable improvement over “Honest Lies” and a surprisingly consistent and well thought-out one at that. Its themes of getting out of one’s headspace and comfort zone, taking chances, making decisions for the better and living life to the fullest are strong, relevant, emotionally resonant and beautifully expressed through Echo Strike’s music. If you’re looking for something inspirational, relatable and life-affirming for your current pop rock/alternative rock/adult contemporary playlist, I highly recommend adding “Not Inside Your Mind”!

OVERALL RATING: Light to decent 4 out of 5 stars.

Echo Strike – ‘Not Inside Your Mind’ review by Planet singer

“Not Inside Your Mind” is the sophomore record from pop rock band Echo Strike, following the release of their debut album “Honest Lies” last year. With that previous album, the eight-man band – led by vocalist Randy Van Gelder –  delivered a collection of songs with breezy, pleasant-sounding production (with ...