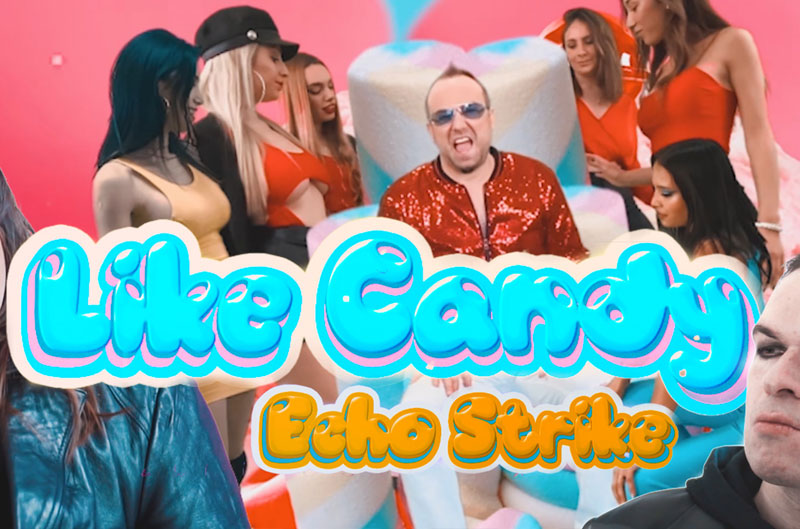 For my first-ever written music video review, I’ll be sharing my thoughts on “Like Candy”, the latest visual from pop rock band Echo Strike’s sophomore record “Not Inside Your Mind”. With the more listens I gave their record since I reviewed it last year, I found myself truly appreciating its sonically pleasurable production, lyrical simplicity and sincerity and life-affirming messages of stepping out of one’s mental, physical (yes, taking the pandemic into consideration) and emotional comfort zones.

“Like Candy” was one of my favourite tracks from “Not Inside Your Mind”, thanks to its playful, marginally risqué lyrics, 80s-inspired synth-pop production and catchy-as-hell hook. I mentioned specifically in my review that it was “much deserving of a 80s-style music video”. And in its own distinct, creative way, that’s exactly what Echo Strike delivers. It certainly lives up to its title with its bright, vivid colours, usage of candy, cookies, donuts, chocolate and other sugary snacks as props, background imagery and transitions, and intentionally artificial, glossy visuals.

What I didn’t expect from this video was an actual narrative – and a surprisingly heartfelt one at that! In-between shots of the band, frontman Randy Van Gelder on vocals and a bevy of female models, we get a simple visual story of a blind date between a full-figured woman (Darya Peskova) and a geeky man (Mikail Antonov). Lacking in confidence and unprepared for the woman’s directness, the man is overwhelmed and perturbed by her gradual sexual advances (which begins with a plate of freshly-baked cookies) towards him. And while I won’t spoil how this situation plays out, I will say it involves both parties being reminded of their “love for sugar”.

This particular narrative serves two purposes to the video. Firstly, it’s a homage to the tried-and-true 80s-comedy movie trope where the nerdy guy who fails to get the physically attractive woman of his dreams winds up with someone who may not be attractive in the ‘traditional’ sense but possesses the inner confidence and sex appeal he lacks (expressed BRILLIANTLY by Darya). While watching the video, I couldn’t help but compare Mikail to actor Rick Moranis’ equally awkward and nerdy character Louis Tully from the “Ghostbusters” movies (blame it on his glasses and open-mouth expressions during Darya’s advances at him). Secondly, as the closing text written by Randy himself states, it presents a genuinely…..ahem….sweet message of being yourself without taking yourself seriously. You can be “like candy” in your own special way and hopefully the right person will show up for a…..ahem….taste.

As a whole, I really enjoyed the “Like Candy” music video! Of all the promotional videos for “Not Inside Your Mind”, this one is easily the most visually dynamic. Its sleek, stylish, ‘sugary’ visual palette alone is enough to keep your eyes glued to the screen, and you can literally feel the fun everyone’s having on-set in each and every shot. Echo Strike fans who’ve been enjoying the videos released for “Not Inside Your Mind” thus far will definitely LOVE “Like Candy”. As for newbies, I highly recommend giving this video a look before checking out the album. Word of caution: you may find yourself desiring something sweet to devour after watching it.

Echo Strike – ‘Not Inside Your Mind’ review by Rebecca Cullen

For my first-ever written music video review, I’ll be sharing my thoughts on “Like Candy”, the latest visual from pop rock band Echo Strike’s sophomore record “Not Inside Your Mind”. With the more listens I gave their record since I reviewed it last year, I found myself truly appreciating its ...