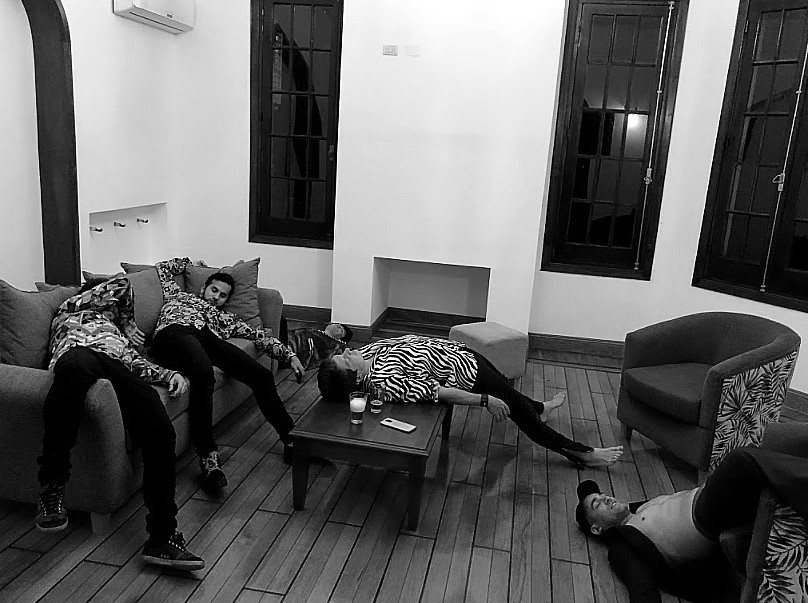 “Dirty Clean Sexy Mean” is the latest album from pop rock band Echo Strike, and not only does it promises listeners (according to their official site) that they’ll “understand what the band is all about” but it also boasts one of the BEST ALBUM COVERS I’ve seen so far in 2021! You can stop reading at this point if you’d like to dissect this multi-layered album cover on your own. I’ll give you five minutes to do a true deep-dive, and don’t you worry; I’ll be RIGHT HERE waiting.

And now we’re back to our regularly scheduled album review!

My introduction to the eight-man band – led by vocalist Randy Van Gelder – began with their 2020 record “Not Inside Your Mind” which I praised for its simple, heartfelt songwriting, catchy hooks and warm, laid-back production which drew from genres like jazz, electronic music, new wave and synth pop. Supported by the theme of getting out of one’s comfort zone (mental, emotional and even physical) to live life to the fullest, “Not Inside Your Mind” was the sonic comfort many listeners, myself included, needed within the depression and uncertainty 2020 gave us.

With “Dirty Clean Sexy Mean” however, Echo Strike also promises listeners a “roller coaster of emotions combined with a brilliance of genre fusion that puts (them) in a genre of their own” – which is exactly what we get on this record. Its central theme is a more ‘heartfelt’ one as it explores the ups and downs – and emotions involved – of love and relationships. And compared to their last record, “Dirty Clean Sexy Mean” finds Echo Strike crafting a concept album of sorts; giving us a loose, emotionally-driven storyline involving hook-ups, toxic relationships, heartache, self-doubt and eventual self-realization.

The album starts off on an upbeat note with the track “Bad Intentions” which features some groovy guitars, crisp drums and a psychedelic, 70s-inspired wah pedal. Lyrically, Randy sticks with the ‘take a chance with me’ theme which was prevalent on “Not Inside Your Mind”. However, he frames himself as the ‘bad boy’, unashamedly telling a woman that he “made wrong decisions (he’s) not gonna mention” and he “got bad intentions”. He’s the risk-taker here, and he wants this woman to take a risk with him “if she’s going to survive”. I love the bit of self-awareness on the hook – and the possible heartbreak he’ll feel if she says no – when he sings “Got to get through to you……soon”.

Speaking of 70s-inspired, the following track “1978” places listeners smack-dab in the middle of a nightclub during the glory days of disco. Sonically, Echo Strike show little concern in fully re-creating the aesthetic of disco songs, opting instead to tap into the vibe of those songs with their own unique flavor. Randy delivers some dance-centric, slightly risqué lyrics over an incredibly fun and carefree disco throwback beat, complete with horns, hand-claps and synths.

Afterwards, Echo Strike time-travels a FULL DECADE forward and treats us to an unexpected remake to the TIMELESS Guns N’ Roses song (and staple of many karaoke nights since its 1988 release) “Sweet Child O’ Mine”. Admittedly upon first listen, I did find Randy’s dual vocals in the first and second verses to be a tad bit distracting, as it sounded like the equivalent to a second lead singer trying to outshine the main lead. But with more listens, I accepted those dual vocals as both Randy adding some Echo Strike uniqueness to a much-beloved song and him simply letting listeners know just how much he LOVES this song (emphasized by the passionate ‘second’ vocal). The band keeps things pop-friendly with the instrumentation with some subtle additions of the original song elements so as not to alienate die-hard fans of “Sweet Child O’ Mine”.

On “Making the Jive”, the first single off the album, Echo Strike pays tribute to the similarly TIMELESS – and karaoke night staple – Bee Gees song “Stayin’ Alive”. And while the band wisely foregoes re-creating its iconic beat, Randy reworks the cadences of the first verse, pre-chorus and first half of the chorus. As a homage / sort of modern update to “Stayin’ Alive”, “Making the Jive” WORKS shockingly well, thanks largely to its witty, tongue-in-cheek, ‘after-party’ lyrics by Randy.

The following track “Everything Hums” treats us to some genuinely pleasant and sunny instrumentation, which Randy uses to express how everything around him feels heightened, now that he’s in love. In the song’s opening bars, he assures listeners that we all deserve love, despite the broken hearts it may take to attain it (“The journey is where you are / Not where you come from / Doesn’t matter who you are / You feel the same warm sun”). It’s a truly beautiful moment on the album, and one which unfortunately heralds the beginning of the end of what might have been a long and fruitful relationship.

We’re then treated to a trio of heartbreak-related songs, starting with “Work to Do”. Over some slow, disenchanted instrumentation, Randy finds himself at the conclusion of a fractured relationship. He pins the blame on his ex-to-be for her attitude and disrespect, and on the hook, comes to the realization that she’ll never change her ways for him. From one great song to another, we get “Her Smile” which, upon first glance, is a song about infatuation. Randy’s smitten by a woman whose smile and frown, as expressed in such a lovely fashion on the hook, “makes everything” and “makes this all true” respectively. But you can clearly tell his infatuation comes from a lonely place. He’s alone at this point on the album, hoping this woman can see, know and believe that he “can be whatever she needs”.

On the beautifully melancholy “Leaving”, Randy analyzes the broken relationship from his ex’s perspective, well-aware of her eventual departure due to her inability to keep things afloat. He suggests that she takes her time in making her final decision and not going about it in a quick, bitter manner. I particularly appreciated how on the first verse, he says “Once in a while / I remember your smile”, which adds some self-reflexive context to the previous song “Her Smile”.

The second half of “Dirty Clean Sexy Mean” begins with a trio of deceptively upbeat songs with dark undertones. The first is “Up for It” which, with its nightclub-oriented vibe, creates the perfect background for Randy’s attempt at finding a rebound. As expected, he finds one and fueled by basic attraction and nothing else, wants to “get down to it”. There’s a great moment of irony on the second verse when he emphasizes just how half-hearted his romantic endeavor is: “Let’s play a game…..baby / Do you know my name…..maybe”.

The next two songs center specifically on Randy’s deep-rooted insecurity.  On “Dangerous Woman”, he uses witty, playful lyrics to express the fear he has of disappointing his new girlfriend whilst framing her as a “bad girl” (a dynamic switch in character from what was presented on “Bad Intentions”), likely to get him in trouble. His insecurity is so outrageous on this track, he’s worried that any disappointment he brings to the relationship will result in her leaving……or worse. The last thing he wants to do is get in the way of her happiness, so he’ll do anything to keep her ‘satisfied’ (“Let me drain the pool so you won’t drown / Let me call you a cab, so you’ll get out”). Over the nocturnal, 80s thriller-like beat for “The Stranger”, Randy adopts a Michael Jackson “Thriller”-esque persona as he vows to protect his new love interest from a dangerous, shadowy stranger (i.e. his own insecurity) who – just to quote “Billie Jean” – ‘goes around breaking little girls’ hearts”. Speaking of little girls, Randy unwisely frames the woman as ‘immature’ and ‘inexperienced’, with “no idea of what’s to come”, and even telling her on the first verse “Don’t post on Instagram”.

Randy gets introspective on the following two tracks “Demons” and “Alone”. As the title for the former suggests, Randy confronts his innermost demons, and while it isn’t explicitly stated what they are, it’s clearly obvious they are at the roots of his insecure nature. I really dug the subtle, horror movie-themed pianos on the opening, along with the sporadic distortion of guitars and Randy’s vocals, giving the track a ‘possessed’ feel. On “Alone”, we get a surprisingly upbeat and glitchy beat, with a talk box-like filter added on the outro vocals, for what is essentially an appropriately depressing song on the loneliness Randy’s experiencing. The emotional contrast between lyrics and music is quite effective here, with Randy’s self-loathing leaving a lasting impression over the production.

The final two songs bring a sense of hope for our crazy-in-love bad boy turned forlorn anti-hero, beginning with “Listen Hard”, where Randy literally listens to his gut, looks in the mirror and realizes there’s still time and room for him to change for the better. Most importantly, he learns that for this change to occur, he must take action (“You know, the problem won’t fix itself / Just recognize, that these are the cards you’re dealt”). On the album closer “Wait and See”, which features a SUPERB vocal performance by Randy himself, he picks himself off the floor and proceeds to move forward with his life. There’s still a marginal amount of doubt on his mind in terms of finding his one true love and being the best person he can be for her (“Who ya gonna be?”, “What do you need?”, “What do you see?”). But eventually, he has to confront that fear in order to move forward, as emphasized on the hook. The song itself ends with the sound of a mic drop, which I interpret as Randy feeling so inspired by the song he just recorded, he literally ran out the studio with a new lease on life.

Overall, I REALLY enjoyed this record! Echo Strike came through with a thematically conceptual record (hopefully not the last) where they took their creative strengths and musical influences to craft a highly relatable narrative on the highs and lows of love and relationships. The end result is easily their most consistent, emotionally resonant and enjoyable record to date, and a true showcase of their distinct musical style. If you’ve enjoyed Echo Strike’s music from “Honest Lies” onwards, you’ll absolutely ADORE this album! If you’re new to the band, I suggest starting with their debut or “Not Inside Your Mind” before jumping into this one. But overall, if you’re looking for some well-written, well-produced, genre-fused pop rock – WITH ONE OF 2021’s BEST ALBUM COVERS, by the way – to add to your playlist, make sure to check out “Dirty Clean Sexy Mean”!

“Dirty Clean Sexy Mean” is the latest album from pop rock band Echo Strike, and not only does it promises listeners (according to their official site) that they’ll “understand what the band is all about” but it also boasts one of the BEST ALBUM COVERS I’ve seen so far in 2021! ...