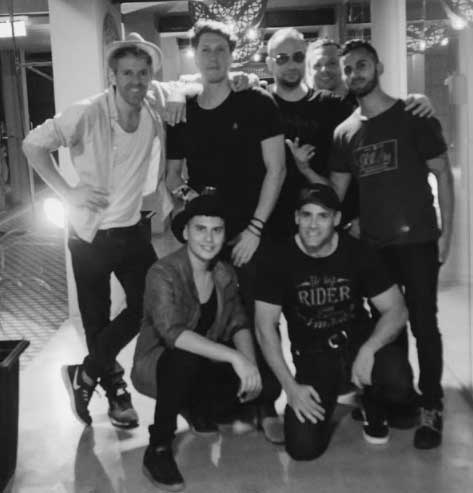 Anyone who can take such a rock and roll stalwart as Guns’n’ Roses Sweet Child of Mine and turn it into a funky, disco, dancefloor classic has got to be a band worth spending some time getting to know. But Echo Strike doesn’t have anything to prove to me, last year’s Not Inside Your Mind showed that this was a band happy to wander sonic paths less travelled. And if that album displayed the bands consummate ability to push at and even hop over generic boundaries to fuse musical strands, to weave new designs out of familiar threads, then Dirty Clean Sexy Mean is not only a continuation of that adventure but an acceleration of the process.

It’s an acceleration in that the band seems to play with a broader sonic palette, the music often feels more adventurous, the songs more addictive. As before, whilst the individual building blocks, the sounds and styles, the tones and techniques, might seem familiar when examined close up, take a few metaphorical steps back and take the time to appreciate the music from a respectful distance and what you find yourself faced with is something pretty unique.

Bad Intentions, which kicks things off is a soulful groover, driven by pop beats and whip-smart guitar licks, chiming synths and buoyant bass pulses. As opening shots go, that is pretty cool, and it sets the tone for what’s to follow perfectly. Making The Jive is an interesting concept, not exactly a cover but certainly a tribute to the Bee Gee’s Saturday Night Fever era and one which takes tha signature sound and reworks it for the clubland and nightlife of the 21st century. After all, why merely cover a song when you can recapture a zeitgeist?

Work To Do is yet more proof of how broad Echo Strike‘s imagination is. At the core is a country ballad, but as always they add spice and sparkle to the template and the result is a sort of futuristic, space cowboy serenade, one which replaces the Nashville stages and campfire acoustica with the emptiness and isolation of the great vastness of the galaxy. It would make the perfect theme for a film about the loneliness of the long-distant space-trucker. (Hollywood producers take note!)

Dangerous Woman sees the band lean in towards some cool electro-rock vibes, darker and more brooding than their usual demeanour but dressed with some sweet and seductive guitar work and Alone is a perky, ironic given its lyrical detachment, piece of poised and purposeful pop. And then we find songs such as Leaving, a Latin-infused ballad, which shimmies and shifts in graceful waves daring you not to sway along to its seductive charms.

Echo Strike is the perfect band for the musical world that we find ourselves in today, this non-tribal, post-genre, anything goes creative wave where influences are where you find them and generic boundaries stand more as a challenge than a solid demarcation. But all of that counts for very little if you don’t have the songs to back up such a contemporary attitude. Thankfully, Echo Strike not only has the songs but has them by the bucket load. And the great thing is that their songs are gently rebellious, confounding expectations and refusing to follow rules and traditions while at the same time remaining wonderfully infectious and deeply addictive.

Dirty Clean Sexy Mean is the sound of disco past meeting the contemporary dancefloor. Pop grooves being rocked up. The sound of soul and funk staying relevant in the modern world. And it is the sound of a group of talented musicians thinking outside the box. But if you want to cut to the chase, it is simply this. A. Damned. Fine. Album.

Anyone who can take such a rock and roll stalwart as Guns’n’ Roses Sweet Child of Mine and turn it into a funky, disco, dancefloor classic has got to be a band worth spending some time getting to know. But Echo Strike doesn’t have anything to prove to me, last year’s Not ...