Echo Strike – Can’t Do Anything Right – reviewed by Matthew Bailey 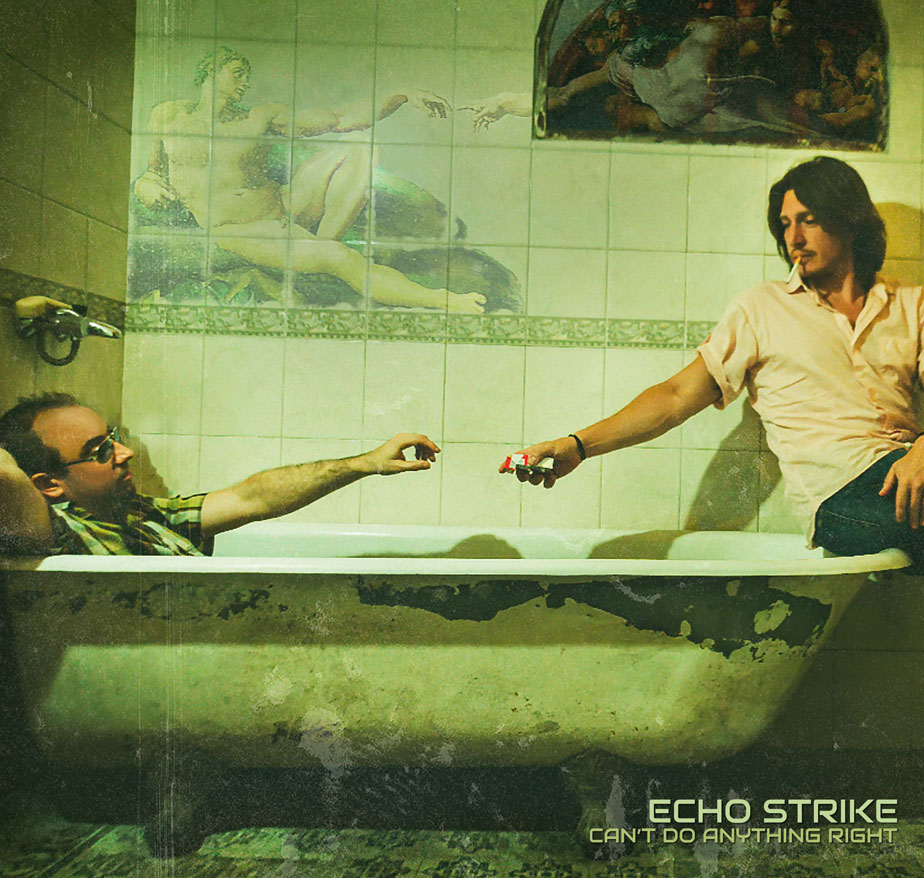 “Can’t Do Anything Right” is the newest album from pop rock band Echo Strike and a follow-up to their 2021 record “Dirty Clean Sexy Mean”. On that project, lead vocalist Randy Van Gelder and his team treated listeners to a musical genre-fusing concept album centered on love, lust, relationships and heartbreak, with a few trips down memory lane like the “Saturday Night Fever”-inspired “1978” and the cover of the 1988 Guns N’ Roses classic “Sweet Child O’ Mine”. I use the term ‘narrative’ because you can picture Randy on that particular album as this suave heartbreaker who can get any girl he wants, but finds difficulty dealing with post-breakup regret and loss.

This new record feels like an extension of the ideas brought up on “Dirty Clean Sexy Mean”, but with a tighter narrative, stronger themes, equally strong and oftentimes nuanced songwriting and a sympathetic lead character to follow. But much to my surprise, what Echo Strike delivered with “Can’t Do Anything Right” is essentially a breakup album, with heavy emphasis placed on an admittedly difficult aspect of heartbreak: fixing the mistakes YOU made in an attempt to restore and renew the relationship.

It’s only right that the title track serves as the album opener, as Randy laments over the fact that he botched yet another beneficial relationship. He frames this lament through a metaphorical crime scene, with him playing the perpetrator with “blood on (his) hands” as he states on the opening line. Delivered in his trademark concise vocal style over some moody, downbeat production that would sound great over a 80s neo-noir film, he desperately proves his innocence to the police, whilst apologizing to his ‘deceased’ partner with lines like “Can’t do anything right…..that’s my life” and “Pardon me…..I’m not some savior”. He even gets a bit psychological on the third verse when he sings “Forgive me….have some pity / Honestly….I have a disease”.

The strength of this title track is carried forward into “Good as Gone”, which sets up the album’s cyclic theme. On the hook, Randy sings “Lost you once, now you lost me twice”, establishing a failed second attempt by both Randy and his ex at maintaining a relationship. Speaking of ex, Randy sings from both his and her perspectives on this breakup, but the underlying brilliance of this song is that you can interpret both verses as spoken entirely by either party. On the following track “Never Too Late”, which opens with this noticeably 80s synth passage and a drum pattern that sneaks its way into the mix, Randy finds difficulty dealing with this new breakup. He also establishes his character’s primary motivation: to win the heart of his ex who he views as “the one”. With this motivation, however, comes a major flaw: assuming that every time he makes mistakes, he could simply fix them and win back his significant other’s affections (“I know that I can fix the things that are broken / But you have to let me in – so I can solve them”).

But that’s not to say that Randy continues on throughout this record like some lovesick puppy. He experiences anger, regret and even doubt. On “In My Head”, which features some of his best writing and singing on the album, Randy sings about a mental and physical war of words between him and his ex. The word “you” is used constantly in the first two verses, as if Randy is either reflecting on harsh statements made at him by his ex or hearing them spoken directly to him. But it’s on the song’s heart-shattering final verse where Randy lashes out at her, using the word “I” in contrast to the previous verses’ use of “you” and sounding rather bitter and condescending in the process of defending himself (it’s hinted that he cheated on her, by the way). He ends his rebuttal by telling her to “get out of (his) head”.

Regret sinks in over the smooth, radio-friendly sounds of “Lied Twice”, and the cyclic theme of the album resurfaces as Randy reveals that, as the title states, he lied twice. Obviously, the title is a reference to the lies which led to his two breakups from his ex, but in a clever bit of writing, also relates to the lies he told himself with regards to fixing this relationship. Interestingly, this is the only track to feature guest vocals from a female back-up singer, who I assume is playing the role of his ex, agreeing with him for the first and only time on the record.

And then we get one of the album’s highlights: “Maze of Doubt”. While its premise is pretty straight-forward (Randy picturing himself as a rat trying unsuccessfully to escape a maze), the song works as this moment of mental turmoil for our foolhardy hero, who finds himself lost in a haze of doubt and confusion following his ex’s departure. Its dark, grungy guitars are captivating as hell, and it’s hard NOT to nod your head to them whilst listening to this song. Also, it benefits from a catchy-as-hell hook (points for the “huh huh huh huh’s” in it)!

The trifecta of songs that follows “Maze of Doubt” add some respite for our hero, albeit for a short time. On the warm, sunny “Hello” (the ‘hollow’ sonic effect used in the intro gives the impression that he’s woken up from the nightmare presented on the previous track), Randy runs into his ex. He starts a polite conversation with her, and on the pre-chorus, confesses that he “feels everything alive, when (she’s) by his side”. Randy’s feelings for her are glaringly genuine and despite his previous blunders, he begs her to give him another chance (“Trying, trying for so long to finally get it right / Stay for the night”).

We then get the upbeat, electro-funk track “Have Fun” which is easily the most joyous and danceable song on the album. While its message is pretty self-explanatory, it’s Randy’s songwriting that makes it yet another album highlight. Utilizing the “maze” sub-theme even further, he encourages his ex-turned-girlfriend-again to flee with him from their respective self-doubt, fears, insecurities and past mistakes. This leads to “Open the Door”, the most ‘intimate’ track involving Randy and his significant other, but intimate in the sense that both parties are mentally, emotionally and physically opening themselves back up to each other, with Randy leading the charge (captured perfectly in the “1,2,3,4” count he does at the end of the hook). The doubt they share for this third attempt at love is to be expected, but Randy’s optimism shines here, as he sincerely feels this third time will definitely be “the charm”.

And then we have “Dagger”, which acts as a gut-punch to those who were hoping and praying this couple will stay together for the remainder of the album! Over a bluesy, disenchanted instrumental, Randy expands on the “You cut me like a knife” opening line of “In My Head”, but instead of being verbally accused of being toxic, he accuses her of the same thing. In this case, she’s throwing all her doubts and insecurities at him like metaphorical daggers. The hook beautifully sums up how desensitized Randy is to the pain of their union (“Sharpen your knife, stick me right / You got too close and stabbed me from behind”). And after it’s revealed that she hooked up with someone else, Randy FINALLY comes to terms with the reality that a long-lasting relationship between the two will never happen. Of course, he’s bitter about it (“I wanna cry, but it ain’t worth my time”) but he assures himself that at least, he gave this third attempt a “God-honest try”.

Admittedly, the following two tracks “Come Away with Me” and “Hollow” do feel like light retreads of Randy’s “heartbreaker” persona which resonated throughout “Dirty Clean Sexy Mean”, but given the context of this album’s narrative, it makes sense that our hero would seek out instant comfort from someone else. On the former, which features this vibrant, slightly salacious beat, an excitable Randy persuades a woman to hook up with him, if only for one night (“Do you wanna feel me deep inside? / Pleasure is worth your price”). “Hollow”, however, plays out like a “morning after”, post-fling moment of self-evaluation, fueled by the emptiness Randy still feels over his recent breakup. Its chorus brilliantly establishes Randy’s mindset at this point on the narrative (“I knew you were the one for me / You think I am the one for you? But you can be sure, it’s time to settle the score / I ain’t with you anymore”). It’s a very relatable moment on the album, as we’ve all felt that hooking up with someone else immediately after a breakup is the best way to heal the scars left behind.

Similar to the final two songs on “Dirty Clean Sexy Mean”, Randy undergoes a life-altering epiphany. On the penultimate track “Rest my Case”, he uses the sense of taste in both a physical and emotional context to describe the lingering desire he still has for his ex. Though the world around him is changing, he finds himself attached to memories centered on his former significant other and at a point, ponders on whether she’s holding on to similar memories as well. The album’s cyclic theme returns once more on the hook when Randy sings “It’s a taste that lingers on in the mouth / It goes on and on and on, no desire burning out”.

And finally, we get “Reset My Soul” which features a pleasant mix of acoustic and electric guitars, with some gorgeous strings in the background and some unexpected yet soothing flute work that starts roughly a minute before its conclusion. Lyrically, Randy delivers a final, tear-inducing plea to his ex-girlfriend to give him another chance, and sounds so incredibly honest doing so, you wind up feeling sorry for him at this climactic stage in the album. Additionally, he sounds the most mature he’s ever been on this record – having gone through this relationship three times now – and it really shows on the third verse where in a powerful moment of clarity, he sings “If I cannot convince you, if I cannot make you believe / We can, at least, part as friends – and not enemies”. It’s a truly beautiful way to end the album, and not only is it its best song, but it’s also one of the best album closers I’ve heard this year!

As a whole, I LOVED “Can’t Do Anything Right”! Echo Strike took their strengths in songwriting, vocal delivery and musical composition – all of which were on full display on “Dirty Clean Sexy Mean” – and applied all three into a sonically, lyrically and thematically rich, textured and cohesive project that serves as the band’s best output thus far. And on a side note, this record continues its predecessor’s trend of phenomenal album artwork with arguably one of the most memorable album covers you’ll see this year! In short, for its intent and purpose, “Can’t Do Anything Right” does everything right, and is absolutely worth seeking out!

“Can’t Do Anything Right” is the newest album from pop rock band Echo Strike and a follow-up to their 2021 record “Dirty Clean Sexy Mean”. On that project, lead vocalist Randy Van Gelder and his team treated listeners to a musical genre-fusing concept album centered on love, lust, relationships and ...