Echo Strike – ‘Not Inside Your Mind’ review 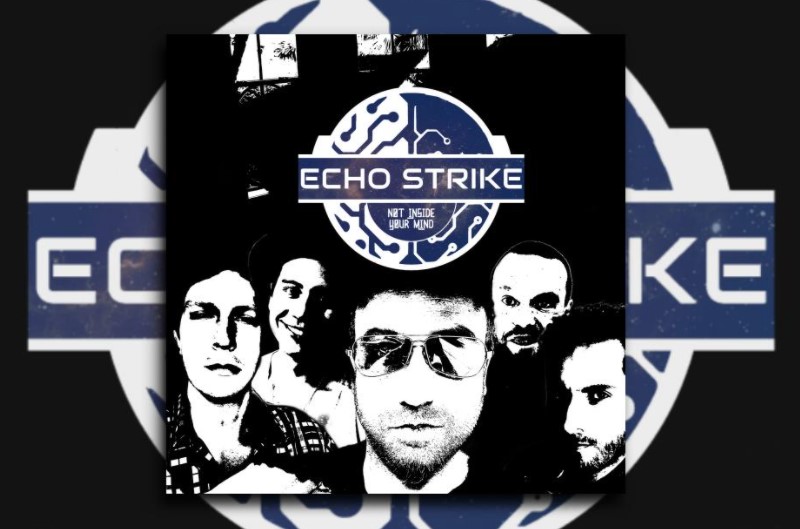 Echo Strike is the product of frontman Randy Van Gelder in collaboration with guitarist Beau Newlin and producer Jonathan Broussard. Together, they produced a solid debut album, Honest Lies, a record that had been slowly developed over many years by Gelder.
A year later, the band has more than doubled since its initial incarnation, sporting a hefty line-up of seven members (now with the introduction of members Homer, Zeta, John and Angel) that contributed to the band’s most recent release, Not Inside Your Mind. In contrast to Echo Strike’s earlier work, Not Inside Your Mind shows a certain maturity for the band’s sound and clarity of vision and direction. It is clear that with this most recent
addition to their discography, they are more sure than ever of their signature and unafraid to step into a role of their own unique making.

Not Inside Your Mind holds it own conceptual grounding as it effortlessly works through thirteen tracks, each of which exhibits skilful diversity and combination of styles and techniques found in various other genres. Overall, one could describe Echo Strike’s sound on this album loosely as ‘rock’, but we all know that such an umbrella term could mean literally anything and very vastly misses the mark on decoding the sound this band
have carved out for themselves in this record. On the flip-side, this is also general enough to touch on a large part of the dynamic and diverse elements to their sound. Each song has its own unique flavour, yet as a full album Not Inside Your Mind brings a strong consistency and grounding all throughout the album. We hear elements of conventional rock and classic ballad songwriting, and one could argue this is

the foundational make-up of the sound, but it is blended skilfully with instrumentation and production styles found across all manner of music. Strong acoustic drums are interchanged and combined with programmed electronic beats to support them. Similarly, we hear electric guitars provide a
substantial drive throughout the whole album, with cliche but aptly-placed and wellperformed solos placed throughout many of the songs, and in many other places we hear keyboards build an electronic atmosphere around the songs that give them each a deeper ambience and density.

On this note, it’s easy to praise the production quality of this album. The recordings are clean and the production is crisp. Clearly a lot of time and effort was put into the album to ensure it achieved a balance of each diverse element within the music. This I often quite
difficult to achieve when there is a combination of acoustic and electric instrumentation with electronic production on top of it. It is usually very easy to discern the difference between the two, but the production is very well spread and mixed to exhibit a perfect equality between all of the elements. This might, to some degree, work against itself too, causing some of the elements to not be as immediately obvious or full of character as they perhaps could be. Similarly, the vocal and lyrical style sometimes struggles to compete equally with the rest of the music, occasionally allowing itself to seem not as polished or engaging as they deserve to be and can let down the rest of the music. But regardless of this, as one cohesive whole, the album (and the band) stand up strong with its own unique sound that is very much unique to itself. Together, they skilfully conjoin their variously styled elements into something greater than the sum of their parts and the subtlety of this stylistic blend makes for an interesting listening experience indeed.

As an album, the sequencing of tracks flows very well into one another, sometimes almost too well, leading to the feeling of too much similarity between each song.

However, as one cohesive listening experience, it packs a punch even if it might occasionally feel as if it isn’t straying too far from a singular direction of theme and sound. Yet, the variation can be found in the subtleties and details of each track, where production techniques vary to spice up the background of each track as the regular instrumentation maintains a certain stability and consistency. It is difficult to achieve a well sequenced album correctly and while Not Inside Your Mind could benefit with some more energetic change-ups in style on occasion,
it nevertheless manages to move fluidly through each track as it perpetuates its sonic grounding.

Overall, Not Inside Your Mind is a strong achievement and a creative second contribution from Echo Strike. Under the creative guidance of Gelder, this seven-piece group know how to project their sound in as cohesive a way as possible at this point in their sonic development. They have clearly put a lot of time and effort into the design and creation of this album. From solidly written songs to masterful technicality and subtlety of performance to a well-rounded production style that polishes everything in a way that is very notable for its own self-completion, Not Inside Your Mind is an enjoyable listen for those interested in a slightly different approach to the pop-rock genre. While it is not without its shortcomings,
this album definitely asserts itself as a grounded and durable release that will hold a special place for its audience. The popularity it has already achieved (over 189,000 listeners on Spotify) testifies to this fact and there is no doubt that it will only continue to grow as it reaches more ears eager to discover Echo Strike’s refreshing approach of musical style. A solid album that is certainly worth experiencing!

Not Inside Your Mind – Echo Strike (reviewed by Dave Franklin)

Echo Strike is the product of frontman Randy Van Gelder in collaboration with guitarist Beau Newlin and producer Jonathan Broussard. Together, they produced a solid debut album, Honest Lies, a record that had been slowly developed over many years by Gelder. A year later, the band has more than doubled ...